Originally appeared in the New Indian Express on October 16, 2010

GANGSTERS AND GHOSTS IN NEW FORMAT

Saurav Mohapatra, best known as the author of the graphic novel series Devi and India Authentic is all set to release two new graphic novels in 2011: Mumbai Confidential– a noir-ish series about the gangster life in Mumbai and Dhurandhar – a supernatural story about a medium who performs one last task for the souls of the dead.

“Mumbai Confidential not a scholarly piece,” Mohapatra says. He describes the graphic novel series about Mumbai Police’s encounter specialists who are given the nod by the establishment to carry out extra-judicial killings of gangsters as more of a “love song to the sub-genre of Hindi movies loosely called ‘Mumbai Noir’”. Heavily influenced by films of the genre like Satya, Company and Black Friday, Mumbai Confidential is a noirish thriller set in the world of encounter cops and the Mumbai underworld. Mohapatra teamed up with artist Vivek Shinde (Virgin Comics) to create Mumbai Confidential. “Vivek is a Mumbaikar and has an excellent feel for the soul of the city,” he says. “So we always joke that Vivek adds the ‘Mumbai’ and I bring the ‘Confidential’ to the project.”

All jokes aside, the art work for Mumbai Confidential is dark and gritty. Rendered in black and white by Vivek Shinde, the panels are more realistic than fans of Indian comics may be used to seeing. Shinde, a talented artist, makes use of the powerful ‘painted style’ to create panels that are so realistic as to feel familiar. “I wanted something hyper-real for the art,” Mohapatra says. “We experimented originally with a stark B/W high contrast style. But once I saw the grayscale wash painted style, I couldn’t really visualize it in any other style.” 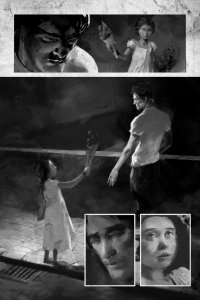 While Mumbai Confidential will only be available to the public in the summer of 2011, a preview one of the first stories in the series- Good Cop, Bad Cop is available for  at download along with a a digital short Digital Short #1, set in the same universe. So far, the comic has been downloaded 1000 times and the short has been downloaded around 500 times. Mumbai Confidential also has its own Facebook and Twitter pages where fans can get a sneak peek at the creative process and keep up with the latest news.

If that isn’t enough, Mohapatra has another comic set to release in 2011 titled Dhurandhar. Says Mohapatra, “Dhurandhar is a supernatural/occult story I co-created with artist Siddharth Panwar, I lovingly refer to it as Indian heartland magic realism. It’s about a man named Damodar Dhurandhar, who serves as the medium between the world of spirits and our own. His job is to do one last errand for the spirits of the recently dead so that they can move on.”

Both Dhurandhar and Mumbai Confidential were created under the banner ‘Dichkaon’ – a creator-owned project spawned by Mohapatra to, as he says, “seed off a creator owned comics culture in India.” Under the banner Mohapatra hopes to create comics in genres not traditionally explored in India. He also tries as much as possible to mentor upcoming artists and provide them with exposure. “I got started in the business with the help of Gotham Chopra,” Mohapatra reminisces, “and so I try to pay it forward.”

His advice to young comics writers and artists? “Go online,” he says. “Basically getting someone to read your pitch is pretty hard. Set your work up online, offer it for free and build your portfolio from there.” Solid advice considering how much for Mohapatra’s work in online, both his own and work done with Virgin Comics, are available as free downloads on his website.

This work by Anisha Sridhar is licensed under a Creative Commons Attribution-NonCommercial-NoDerivs 3.0 Unported License.